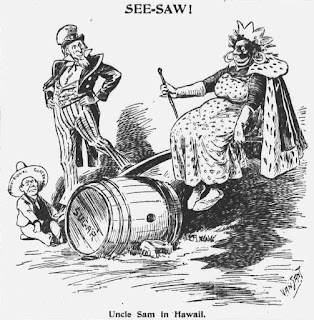 This political cartoon is about how sugar planters which can be seen on the tiny farmer with the hat that says provisional government on it was being threatened or overthrown by Queen Liliuokalani who is high off the ground on the other side of the see-saw because Uncle Sam or the United States of America has to come and take Hawaii as its own and rid of Queen Liliuokalani for sugar as seen on the barrel and for our naval base named Pearl Harbor. The cartoonist's message on the issue is the fact that without the United State stepping in to stop Queen Liliuokalani from trying to stop sugar cane farmers they wouldn't have stood a chance. Other opinions I imagine another person having on the issue is the fact that the farmers might have stood a tiny chance since Queen Liliuokalani and Hawaii did not really have an army at the time. The techniques the cartoonist used to make this cartoon persuasive was Exaggeration  and Labeling. Exaggeration was used because based on pictures online Queen Liliuokalani did not look huge and have a face like that and Uncle Sam is huge but the farmer below him is tiny. Labeling was used because on the barrel it says sugar and on the tiny farmers hat it says provisional government. This cartoon supports my position on American Imperialism because it shows how much The United States wanted to get new materials like sugar cane as seen on the barrel and yet again how we continued to believe we needed to expand.

Popular posts from this blog 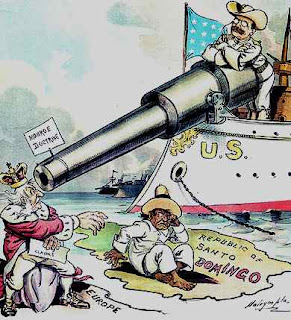 Roosevelt Corollary
This political cartoon's issue is about how the Roosevelt Corollary was a stronger version of the Monroe Doctrine (which can be seen by the cannon with the sign Monroe Doctrine on it) The Roosevelt Corollary basically made the United States the policeman of the western hemisphere (seen by Roosevelt defending Santo Domingo from a European country in the cartoon). The cartoonist's message on the issue is that Europe will have no chance of getting involved with the western hemisphere while the United States is around. Some other opinions another person may have on the issue is that the United States has no right to just say that European countries can't get involved with the western hemisphere. The techniques the cartoonist used to make this cartoon persuasive was Labeling and Symbolism. Labeling due to the ship Roosevelt is on saying U.S., the cannon having a sign on it that says Monroe Doctrine, and the island saying the Republic of Santo Domingo.…
Read more